How to run Background Tasks in ASP.NET

A few years back Phil Haack wrote a great article on the dangers of recurring background tasks in ASP.NET. In it he points out a few gotchas that are SO common when folks try to do work in the background. Read it, but here’s a summary from his post.

If you think you can just write a background task yourself, it’s likely you’ll get it wrong. I’m not impugning your skills, I’m just saying it’s subtle. Plus, why should you have to?

There’s LOT of great ways for you to do things in the background and a lot of libraries and choices available.

There’s lots of great articles and videos on how to use Azure WebJobs, and lots of documentation on how Worker Roles in scalable Azure Cloud Services work, but not a lot about how your hosted ASP.NET application and easily have a background service. Here’s a few.

As it says “WebBackgrounder is a proof-of-concept of a web-farm friendly background task manager meant to just work with a vanilla ASP.NET web application.” Its code hasn’t been touched in years, BUT theWebBackgrounder NuGet package has been downloaded almost a half-million times.

The goal of this project is to handle one task only, manage a recurring task on an interval in the background for a web app.

If your ASP.NET application just needs one background task to runs an a basic scheduled interval, than perhaps you just need the basics of WebBackgrounder.

BUILT IN: QUEUEBACKGROUNDWORKITEM – ADDED IN .NET 4.5.2

Somewhat in response to the need for WebBackgrounder, .NET 4.5.2 added QueueBackgroundWorkItem as a new API. It’s not just a “Task.Run,” it tries to be more:

QBWI schedules a task which can run in the background, independent of any request. This differs from a normal ThreadPool work item in that ASP.NET automatically keeps track of how many work items registered through this API are currently running, and the ASP.NET runtime will try to delay AppDomainshutdown until these work items have finished executing.

It can try to delay an AppDomain for as long as 90 seconds in order to allow your task to complete. If you can’t finish in 90 seconds, then you’ll need a different (and more robust, meaning, out of process) technique.

The API is pretty straightforward, taking  Func<CancellationToken, Task>. Here’s an example that kicks of a background work item from an MVC action:

FluentScheduler is a more sophisticated and complex scheduler that features a (you guessed it) fluent interface. You have really explicit control over when your tasks run.

FluentScheduler also embraces IoC and can easily plug into your favorite Dependency Injection tool of choice by just implementing their ITaskFactory interface.

Quartz.NET is a .NET port of the popular Java job scheduling framework of the (almost) same name. It’s very actively developed. Quartz has an IJob interface with just one method, Execute, to implement.

Then, inside your Application_Start, you call JobScheduler.Start(). There’s a great getting started article on Quartz at Mikesdotnetting you should check out.

And last but definitely not least, the most polished (IMHO) of the group, Hangfire by @odinserj. It’s afantastic framework for background jobs in ASP.NET. It’s even optionally backed by Redis, SQL Server, SQL Azure, MSMQ, or RabbitMQ for reliability.

The best feature from Hangfire is its built in /hangfire dashboard that shows you all your scheduled, processing, succeeded and failed jobs. It’s really a nice polished addition. 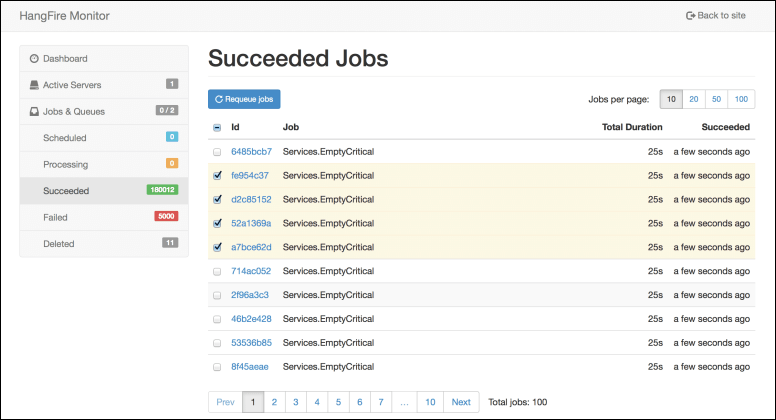 You can enqueue “fire and forget” jobs easily and they are backed by persistent queues:

You can delay them…

Hangfire is just a joy.

Check out the Hangfire Highlighter Tutorial for a sophisticated but easy to follow real-world example.

There’s a rich ecosystem out there ready to help you with your background tasks. All these libraries are excellent, are open source, and are available as NuGet Packages.

Think Outside the BoXX, but write inside it!

How to be a Productive Programmer

A re-introduction to JavaScript